Success is through Silence | The small things count

Home Inner GameSuccess is through Silence | The small things count

Success is through Silence | The small things count

Everybody hears about the success but no one pays attention to the hustle. The stories of success that are shown to us through the media are often glamorous ones. These stories generally show someone or something that rose from supposedly no where, catapulting themselves into fame. This happens when a new artist drops a new single that takes the world by storm, a business releases an innovative product, or new addictive APP hits the APP store. These events would have us believe that success is only for the lucky ones. I invite you to consider the idea that we make our own luck.

Success is through Silence

Excelling at something is barley ever due to luck or talent alone. What I mean by ‘Success is through Silence’, is that you are the sum of the things you do when nobody is watching (‘silence’). Success stems from consistency in doing the small things that others are not willing to do, things that seem insignificant when taken into account during the moment. The human mind fails at prognosticating events in the horizon. It is difficult to see the compounding effect that your small choices everyday make. This is why many people do not achieve what they want to achieve, they greatly underestimate the power of their choices. I am sure you have experienced dieting before, what happens when you don’t put the cookie down? You eat the whole packet. The mind will always use the excuse “I can always start tomorrow”, failing to analyse the the implications of its actions. The subconscious mind records all, it remembers that the other day you ate the whole packet. The act of eating the whole packet weakens you, making it harder to resist the temptation the next time it arises.

Consistency is the key

It is only through doing the right things over and over again that we can guarantee success, we create our own luck. If we are constantly sticking to the plan, the same compounding effect that ruined your diet will work in your favour. Mathematics is real, and probability by default is also real. If you are playing the game of success every day, one of these days you will win. If you have an infinite number of monkeys typing on the computer, one of them would write the whole Game of Thrones series, it’s all mathematics.

George RR Martin: writer of the ‘A Song Of Ice And Fire’ series

George started writing novels in 1976, and only started experiencing massive success in 2011, 35 years later after ‘Game of Thrones’, became a Tv show ( keep in mind he wrote the book in 1996). For many people he seemed to have been an author who came out of the blue and attained great wealth. The reality is that he has been on his grind silently for years before gaining his fame. He was not lucky, he just understood the mathematics. 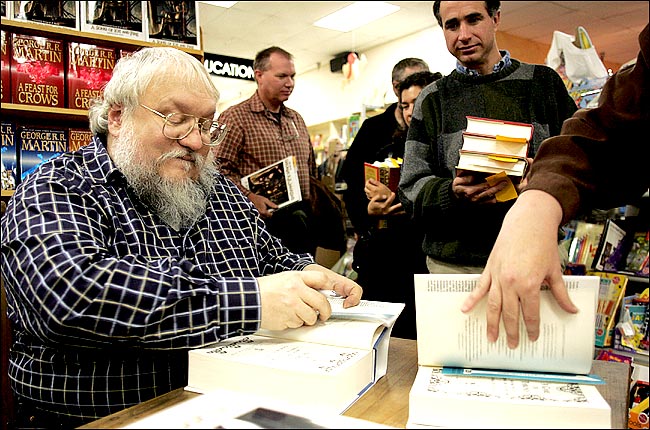 Recently there have been many articles discussing the massive amount of money that PewDiePie was able to accumulate through his youtube in 2014 ($7.4 Million). Many people are outraged that someone could attain such massive success playing video games on the internet. What people fail to understand is that PewDiePie has been uploading content on youtube at an incredible rate. He started his channel in 2010 and has over 2400 videos.Given that his material was of value ( people found it entertaining), it is no surprise that has has been able to accomplish what he has.

You might have seen the UFC’s women bantamweight champion Ronda Rousey kicking some serious ass in almost every single fight she has been in. By now you should know that she did not get to where she is by luck. Ronda has been training in Judo since she was 11, she qualified for the 2004 Olympics at age 17. How on earth could she not succeed? How can you not be the best at what you do with 17 years of fighting experience and an Olympic medal? She had been killing it silently for many years well before she set foot into the octagon.

Stick with the Silence

Remember that every choice you make counts, fuck luck you make your own luck. Luck is a word people use to justify their excuses, we have no control over luck so why would you even think about it? Most successes are not through luck, but are through consistency in the silence. Doing everything that needs to be done regardless of its significance. If you can stay on this path, probability will work in your favour and that is something you should believe in.

Your email is safe with us.

We're currently offline. Send us an email and we'll get back to you, asap.